How are people using collaboration and online tools at work for project management?

I wanted to find out, so I asked our community, and here are the results. They didn’t turn out as I expected…

I used the survey as input to my book, Collaboration Tools for Project Managers (now a PMI best-seller).

What are collaboration tools?

Before we get into the survey results, let’s agree what we are talking about.

A simple definition of collaboration is “to work with others to get something done.”

When you collaborate you:

Collaboration could be seen as a fancy new label for “teamwork, “but I think it goes further than that. Teamwork doesn’t include the option of working with people outside your team.

Today, many project teams rely on external parties, such as suppliers, who also play their part. Teamwork doesn’t adequately reflect the level of creativity, knowledge sharing, and debate that collaboration offers.

Teamwork implies working under the direction of a team leader, whereas collaboration often takes place in non-hierarchical situations.

Project managers no longer manage tasks and people; they create collaborative environments where people can do their very best work to achieve corporate goals.

Collaboration tools are what we use to do that. They don’t have to be software, but as many teams opt for online working and tapping into the amazing pools of talent outside the local commuting zone, online and cloud-based solutions are a popular choice.

So how are online collaboration tools used? Here are the survey results.

1. Do you use collaboration tools on your projects?

I expected the vast majority of people to say they did. It’s far more common now than when I first started researching social media and project management in 2009.

94% reported that they do use collaboration tools at work for project management. A tiny 6% said they don’t.

2. Why do you use collaboration tools?

The most common reason for using collaboration tools is to share documents (27% said they used their tools for this).

Communication was the second most common reason, with over one in five respondents saying they used it for that. The third most common response was working with  internal stakeholders, claiming 20% of the pie.

I was expecting the ‘other’ category to be higher. Some of the responses given include:

3. What benefits do you see from collaboration tools?

The most common benefit from using collaboration tools is ease of finding information (33%).

A quarter of respondents claimed that collaboration tools help them create a sense of team.

In the survey I did in 2011 only 18% of people said that they thought improved team morale was one of the benefits they were seeing as part of using social and collaboration systems at work.

I hope this shows that businesses are getting better at finding ways to improve how virtual teams work effectively.

The other results were:

This is where the results started to deviate from what I expected. I had pre-populated six options, based on what I felt were the market leaders and hot tools.

The remaining 40% of respondents ticked ‘Other’ and told me about one or more tools that they used. I wasn’t expecting the market place to be quite so fragmented.

I can pick out some trends. Microsoft is still the market leader. Roll Yammer and Sharepoint in with other Microsoft tools and 38% report using Microsoft-owned products (perhaps with some others in the mix too).

Less than 5% reported using Google tools. This points to Google being far less feature-rich for a mature commercial organization and also perhaps questions whether businesses are really buying into cloud services at the moment.

About 5% said they were using all or part of the Atlassian suite: Jira and Confluence.

I was expecting the responses here to be mainly ‘my team’ or ‘my department”.

Again, it wasn’t what I expected, with 60% saying that the collaboration tools in use were deployed across the whole company. My 2011 survey had this at only 37% so it’s increased significantly.

The ‘just in my department’ results have gone down since 2011. Previously at 20%, today only 12% of respondents said that the tools they use are department-specific.

I think this is a good thing: we’re seeing enterprise adoption of collaboration technologies, which points to less silo working and better cross-team engagement.

6. Do collaboration tools improve the way you work?

I asked this question in 2011 but it was slightly different. Then I framed it as ‘Can/Do social media tools improve the way you work?’ I wanted to make it theoretical so that people who were supportive of the concepts but not actively using them could also express their opinion.

This time round I expected more people to be using them so the question was different. In 2011, 7% disagreed that this technology had the ability to improve the way they worked.

This year, the results showed that only 1% feel they do not add any improvement. 20% weren’t sure (compared to 17% who had neutral feelings in 2011).

74% felt that collaboration tools do improve the way they worked. This actually isn’t that different from the 2011 results of 76%.

I suppose I thought the perception of the usefulness of technology for managing projects would have gone up, but we have to acknowledge that everyone feels differently.

The major difference this year is that I think the responses are based on practical experience, rather than a theoretical opinion about a toolset the respondents weren’t actually using.

7. Will you continue to use them in the future?

Interestingly, nobody said they would stop using them and their use at work would decrease, although one person wasn’t sure.

A final person said they would use them more when more people adopted them, which is an interesting point. The more traction a tool has within a project team, department or company, the more useful it becomes.

Thanks very much to everyone who took the time to fill in my survey!

I get it: it’s tiresome to have to review hundreds of products and try to work out from the long sales pages whether they actually have the features you need or not.

I’ve had to do that exercise several times, but I don’t do it any more! I know my time is worth more than that, so I am happy to recommend Crozdesk, the comparison site that actually has real experts behind the scenes.

They ring you. You spend 15 minutes or so on the phone. They get it. They match your needs to the products out there (looking at over 360 tools). They can save you a lot of time putting together your shortlist. Then you can take it from there.

There’s no obligation and no charge (it’s funded by the software companies, in case you were wondering). So there’s nothing to lose and hours of your time to gain.

Ready to check it out?

A new study* has shown that nearly half of Project, Programme and Portfolio Management Offices (PMOs) rate themselves as Fair or Poor in terms of effectiveness. I think that’s terrible, especially as it was the PMO team or those close to them who responded to the survey. As the purpose of having a PMO is…

In the market for new project management software? This review of enterprise software Celoxis may just mean you’ve found the product you have been looking for… Read on to find out what I thought about this tool.

Leadership, teaming, technology adoption and measuring effectiveness are the four things that Mike Hughes, Office Business Group Lead for Microsoft Ireland believes are essential for building a successful project team. He spoke at an Ireland Chapter of PMI event recently about collaboration best practice and how to create effective project teams in the current business… 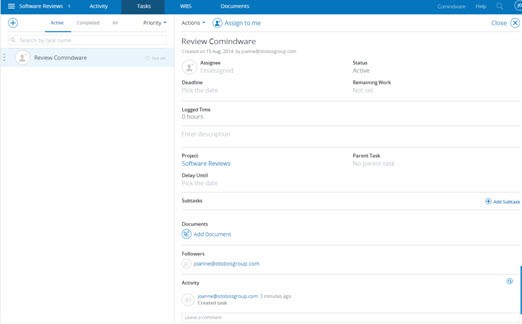 General information Name: Comindware Project Vendor: Comindware Hosting options: Web hosted and locally hosted Cost:Cloud service starts at $29.99 per user per month for up to 9 users. On-premise service starts at $450 per user (a lot, but that’s a one-off fee). Fees decrease the more users you have. Languages:English Currency: No currency options that…

I reviewed three different tools to find the best meeting minute transcription software that you can use in your in person meetings.