One Saturday in 2008 I made Monica Enand, CEO and Founder of Zapproved, get up extra early to demo her new software for me. It was 8am on the Pacific Coast, and she didn’t sound like she was sitting in her pyjamas in front of her PC. Given that it was the weekend before launch, she was probably up anyway, sorting out all those last minute things that go wrong just before you hit the button and send your project out into the wide world.

Zapproved, she told me, is “the first free, cloud application that manages decision making and approval.” Essentially, it’s a way of pinning people down without all the infernal email chatter. Research by Basex shows that we will get 228 new email messages a day by 2010, and 30% of what reaches our inbox is corporate ‘spam’. That’s a lot for your project sponsor to sift through before she reaches the one that asks six people for their opinion and aims to facilitate a decision by to-ing and fro-ing across the wastelands of Outlook.

Zapproved will avoid the chatter, if not the actual email itself. You create a proposal to which people can agree or disagree. They then click ‘Accept’, ‘Deny’ or ‘Comment’ which forces people not to sit on the fence. Zapproved has grown by word of mouth since the beta version was put out there in August and had 1500 members as at the weekend. That was before I signed up to see what all the fuss was about, and before the final version was made public yesterday. 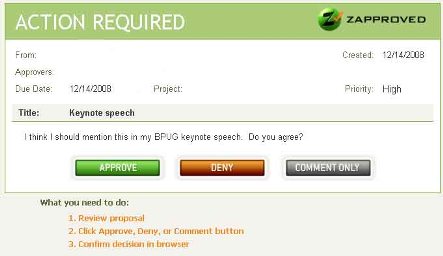 So, is it really going to catch on? Cloud computing – using web-hosted applications for your day-to-day life – isn’t yet a fully corporate thing. LinkedIn and Flickr are cloud applications: software that exists online and doesn’t sit on your PC. There are plenty of people using this kind of software, but you don’t get much of it in large offices.

“Two years ago cloud computing was an issue,” says Enand. “As the economy takes a downturn people will be more interested in hosted apps which can be used instantly without a big IT budget.”

That’s certainly true. Zapproved has a free version but it will only save your archived decisions for 60 days, so if you think someone’s going to query what you got signed off months ago you are going to have to pay to upgrade or keep a decision log somewhere else.

Still, I think Zapproved, or tools like it, are a step in the direction of making project manager’s lives easier. Need a document signed off? Zapprove it. Scope change doing the rounds? Zapprove it. Enand doesn’t use ‘zapprove’ as a verb, that’s just me, although maybe it will catch on.

Enand and her team have more plans. Outlook integration – a toolbar-style Zapproved plugin, an app for the iPhone, electronic signatures and verification. There’s a whole industry around making decisions. However good Zapproved gets it won’t take away the need to build consensus and you’ll still need to talk to people, engage them with your ideas and help them understand why their opinion in the decision is important.

Where it will add value is at the ‘but you said you were OK with it’ stage. Get your stakeholders to click a button and there you go: an instant, centrally brokered decision log. Whether they are the right decisions will be up to you – no software is going to help you there.

0 (0) Project management tools come in many shapes and flavours, and most of what I review is software designed to manage small and medium-sized projects. Primavera, on the other hand, is an enterprise-grade software solution aimed at companies with a mature approach to project management probably with a programme or portfolio management approach in…

Find out how Big Blue Digital used time tracking and project management software to increase their project profitability by almost 50%! The weird thing is, this wasn’t even hard, and it’s so easy for you to do too.

Check out my GanttPRO review to find out if this Gantt chart software is right for you. Also includes a mini tutorial.

0 (0) Setting up a project is easy: anyone familiar with MS Project will be able to navigate around without problems. The main part of the screen shows the task list and Gantt chart. All the standard functionality is there: managing resources, costs, dependencies. I particularly like the semi-transparent way the duration bars on the… 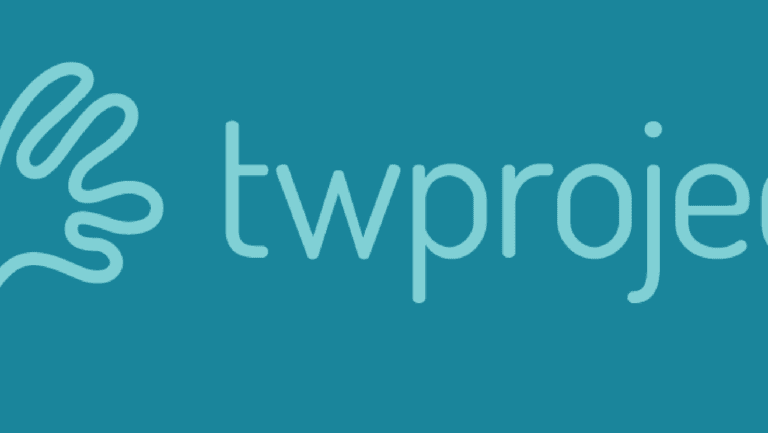 0 (0) Are you looking for an all-in-one platform to manage projects, To Do lists, timesheets, costs, and documents? Twproject (say: T W Project) could be the perfect fit for you. Let me tell you why. General Information Name: Twproject Vendor: Twproject, srl Hosting options: Install on your own server or use a dedicated server…

0 (0) Why is registering for anything so complicated? The ‘State’ field is not marked as compulsory when signing up for an account with Severa. Except my registration would not be accepted without one. So it is compulsory, then. Having said that there is no validation, as I just typed ‘State’ and I was in….